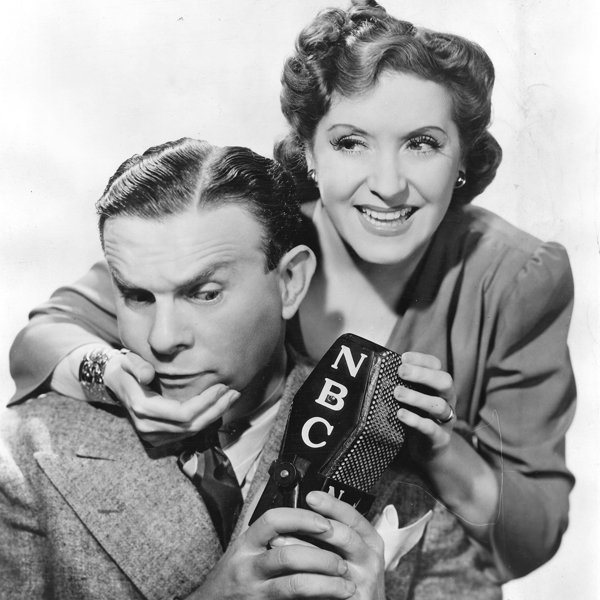 He’s acknowledged by many to have been one of the finest straight men in comedy—if not the finest.  This, however, does George Burns a disservice.  The man born on this date in 1896 immodestly attributed the success of his hit comedy teaming with wife Gracie Allen to Gracie herself…but at the height of their popularity, only a handful of people knew that George was the architect behind their incredible achievements on stage and in movies, radio and television.  The genius of Burns and Allen was that the “Burns” half was content to downplay his contributions to allow “Allen” to take all the credit.

Nathan Birnbaum (his given name) was born in New York City, and from his early childhood days he knew that he wanted to be an entertainer.  That decision was made for him when he was a boy of seven: George and several of his friends passed the time they spent working in a candy shop by singing harmony…and when a number of passersby heard their vocalizing and threw pennies their way in approval, George knew show business was in his future.  Starting with “the Pee-Wee Quartet,” George would eventually work his way up to vaudeville headliner—he may not have been a big name, but he didn’t lack for determinedness; during his vaudeville days he entertained as a vocalist, a dancer…and even a seal trainer.

Good fortune came Burns’ way in 1922; he had just dissolved his partnership with Billy Lorraine when he happened to cross paths with one Grace Ethel Cecile Rosalie Allen.  Burns suggested to his future wife that they form a team, and after a trial period in which Gracie played “straight man” to George’s comic, Burns realized that it would work better if they switched roles.  (The fact that audiences laughed at Gracie’s “feed” lines and were stone-faced at George’s replies no doubt succeeded in convincing him.)  They tied the knot in 1926, and gradually became so popular that they were able to achieve every vaudevillian’s dream: playing the top spot at New York’s Palace Theatre.  Looking back on those years, George later observed, “And all of a sudden, the audience realized I had a talent. They were right. I did have a talent—and I was married to her for 38 years.”

George Burns and Gracie Allen were among the first vaudeville stars to get in on the ground floor of radio…though it wasn’t in America.  In England, through the BBC, they were heard on the “wireless” for fifteen weeks during a tour of the country in 1931.  Their American radio career began when Eddie Cantor extended an invitation to appear on his mega-popular Chase and Sanborn Hour—only Cantor just wanted Gracie at the mike, and planned to deliver George’s straight lines himself.  (Burns was miffed at this slight, but let Gracie take the gig once he was given permission to write her material.)  After also guesting on Rudy Vallee’s Fleischmann Hour, Burns and Allen finally got their own radio showcase in February of 1932: on The Robert Burns Panatella Program.  Even then, they had to wait until the star of that series, bandleader Guy Lombardo, departed for other opportunities before they were placed in charge of the show.

George and Gracie were tailor-made for radio: as George once remarked, “Both of us could stand still in front of a microphone and read out loud.  Gracie had a terrific voice, and I had Gracie.  And that’s all it took.”  Throughout the 1930s their programs for White Owl, Campbell Soups and other sponsors were tremendously popular with audiences.  The team is best remembered for one of the medium’s great promotional stunts in which Gracie went on a nationwide hunt for her “missing” brother, often interrupting other broadcasts asking about his whereabouts.  By the 1940s, their ratings had slipped a bit…but George and his writers turned it around by revamping their program into a situation comedy format.  The Burnses’ reign on radio (for Swan Soap and later Maxwell House Coffee) continued until 1950, and by that time they were ready to conquer television.

October 19, 1950 marked the debut of The George Burns & Gracie Allen Show, a television series that was quite similar to the format of their radio program.  For their first two seasons, the Burnses appeared live every other week, but became a weekly feature in the fall of 1952.  (Following the example of I Love Lucy, the show was filmed with a three-camera process, allowing Burns and Allen to later thrive in syndication.)  While George & Gracie’s series was never a monster hit on the tube, it held its own against its competition…and probably would have continued in perpetuity had Gracie not decided that the eighth season (1957-58) would be her last.  George had always managed to persuade his “Googie” to go one more round in past radio and TV seasons, but Gracie was firm on this one; she wanted to retire due to health issues.  The show did soldier on for an additional year as The George Burns Show (which featured everyone from the old program except Gracie—though she was referred to often), but audiences knew that it just didn’t work without Gracie.

Gracie’s concerns about her health proved quite prescient; she passed away in 1961, and George was devastated.  About the time that the couple’s TV series switched to a filmed format, Burns had started a production company — McCadden Corporation — and he experienced success producing programs such as The Bob Cummings Show (a.k.a. Love That Bob), The People’s Choice and Mister Ed.  Performing, however, was still in his blood; he attempted to recapture the magic of his and Gracie’s act with a 1964-65 series entitled Wendy and Me…with Connie Stevens as the ersatz Gracie.  The sitcom was not a success, and Burns returned to television production (with series like No Time for Sergeants and Mona McCluskey) while singing, dancing and joking in front of audiences in venues from college campuses to Carnegie Hall.

George’s closest friend, and fellow comedian, Jack Benny was scheduled to play the part of veteran vaudeville comic Al Lewis in a film adaptation of Neil Simon’s Broadway hit The Sunshine Boys…but died before that project came to fruition.  So Burns stepped in for Benny and, playing opposite Walter Matthau (as Willy Clark), was not only nominated for a Best Supporting Actor Academy Award but won the Oscar at the age of 80—the oldest actor to do so until Jessica Tandy’s Best Actress win for Driving Miss Daisy (1989) in 1990.  George was no stranger to movies—he and Gracie appeared in a number of comedy shorts for Paramount in the 1930s, as well as features like Six of a Kind (1934) and We’re Not Dressing (1934)—but the Oscar win revitalized his career.  Two years later, he won raves for playing the Almighty in Oh, God! (1977) (a role he would reprise in two sequels) and as a crafty senior citizen who masterminds a bank heist in Going in Style (1979).  George continued making film appearances (and writing several best-selling books) until he reached the ripe old age of 100 in 1996…then it was his turn to say “Good night.”