“…and now…a tale well-calculated to keep you in…”

When “the Golden Age of Radio” came to what many acknowledge as its official end on September 30, 1962—there were only two major network dramatic offerings left standing.  One was Yours Truly, Johnny Dollar—a crime drama starring Mandel Kramer as “America’s fabulous freelance insurance investigator.”  The other was the real warhorse—billed as “radio’s outstanding theatre of thrills,” the dramatic anthology known as Suspense had been entertaining audiences for twenty years.  It premiered over CBS Radio seventy three years ago on this date today.

Technically, the origins of Suspense go back a bit further—to a 1940 summer series that was also broadcast on CBS.  Forecast was a variety program that offered on-the-air auditions of potential series, with the listening audience urged to send in letters of support for those that struck their fancy.  The July 22, 1940 broadcast featured a radio adaptation of “The Lodger,” based on the 1926 film directed by Alfred Hitchcock (who was directing his first American radio broadcast).  Sir Alfred was interviewed on the program that evening—but if you listened to the show back then (or have heard it recently, since the transcription has survived) you might have said to yourself: “That doesn’t sound like Hitchcock.”  That’s because it wasn’t—it was actor Joseph Kearns, filling in for Hitch (who wouldn’t become comfortable as a host until his TV series fifteen years later).   Kearns would go on to play another pivotal role on Suspense—but more on that in a minute.

When Suspense debuted on June 17, 1942, the production of the show was overseen by William Spier—whose exacting standards and strict professionalism helped to make the program the success it ultimately became.  Spier—who would earn the nickname “the Hitchcock of the airlanes”—oversaw every aspect of the program, from story to sound effects…and he was also able to lure many of Hollywood’s big names to participate in his weekly half-hour theater.  Among the cream of the movie colony crop that made appearances on Suspense were Orson Welles, Cary Grant, Ida Lupino, Olivia DeHavilland, Frank Sinatra, Edward G. Robinson, Lana Turner and so many more.  Spier also exercised a little novelty in his casting on occasion, giving dramatic showcases to performers such as Bob Hope, Milton Berle, Lucille Ball, Judy Garland, Lena Horne and Phil Silvers.  Spier always took special care to tailor each story to the talents of each weekly guest, and they would place their complete confidence in him. 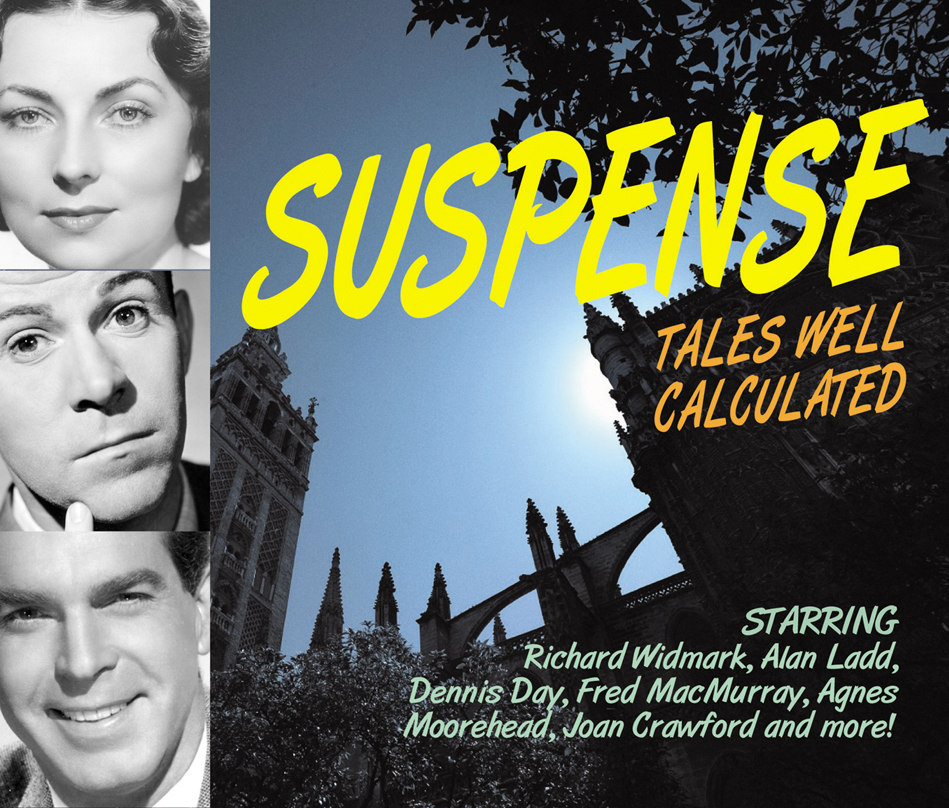 Suspense started its broadcast history as a sustained network program, but soon picked up a sponsor in Roma Wines in December of 1943.  The program’s early format was established by Spier with three simple rules:  the stories must be realistic, each tale would establish in its first few minutes a situation that placed the protagonist in a ticklish predicament, and the murderer would always be punished.  The program also used a narrator in its early years known as The Man in Black—a mysterious, omniscient observer who commented on the proceedings in a manner similar to The Whistler…except he didn’t get nearly as involved.  The Man in Black was played on occasion by Ted Osborne, but most fans know that Joseph Kearns was the one who played “Blackie” most often during the years the character was featured (1943 – 1947).

William Spier was inclined to break his own narrative rules on occasion.  He was loathe to do supernatural or science-fiction tales, but when a two-part presentation of “Donovan’s Brain” (starring Orson Welles) generated much positive buzz, he relented and allowed the program to tackle such material on occasion, with broadcasts like “The Dunwich Horror” and “The House in Cypress Canyon.”  Even the most famous of all the Suspense plays, “Sorry, Wrong Number,” violated a sacred tenet and allowed the guilty party to go free at the end.

Spier functioned as the show’s director-producer until February of 1948, when the network expanded Suspense to a full hour (and added Robert Montgomery as a weekly host) and utilized the talents of William N. Robson and Anton M. Leader.  The ballooning of Suspense did not help the show’s ratings, and it soon shrunk back to a half-hour while landing another sponsor in July of 1948: Autolite spark plugs.  Leader stayed with the program until the end of the 1948-49 season, and then handed the directorial reins to Norman Macdonnell (with Spier returning as producer), who in turn passed the baton to Elliott Lewis in August of 1950.  Lewis held the job (occasionally adopting stories based on real-life events) until Autolite relinquished its sponsorship.  Subsequent directors included the returning Macdonnell and Robson, along with Antony Ellis, Bruno Zirato, Jr., and Fred Hendrickson.

With Suspense returning to its sustained origins in 1954, the huge pool of Hollywood celebrity talent evaporated.  With only the occasional big name appearance, the program found itself relying on tried-and-true radio actors like William Conrad, Lawrence Dobkin, Georgia Ellis, Harry Bartell, John Dehner…and even the ubiquitous Joseph Kearns.  The budget for the series seemed to shrink with each passing year; often Suspense would have to recycle scripts previously used on its “sister” series, Escape.  Suspense moved its production from Hollywood to New York in late August of 1959, with multiple sponsors paying the bills.  CBS decided to put Suspense out to pasture in November of 1960.  There was still some life in the old filly, however, because it returned to the network on June 25, 1961 (replacing the cancelled Gunsmoke) and stayed around long enough to usher out the end of radio.

At the peak of its popularity, Suspense was one of radio’s most highly-regarded dramatic shows, winning a Peabody Award (in 1947) and earning the praise of Cary Grant, who once remarked: “If I ever do any more radio work, I want to do it on Suspense, where I get a good chance to act.”  New generations of OTR listeners are indeed fortunate that approximately 900 of the show’s 945 broadcasts survived the ravages of time and neglect, and many of them are available on CD and digital download.