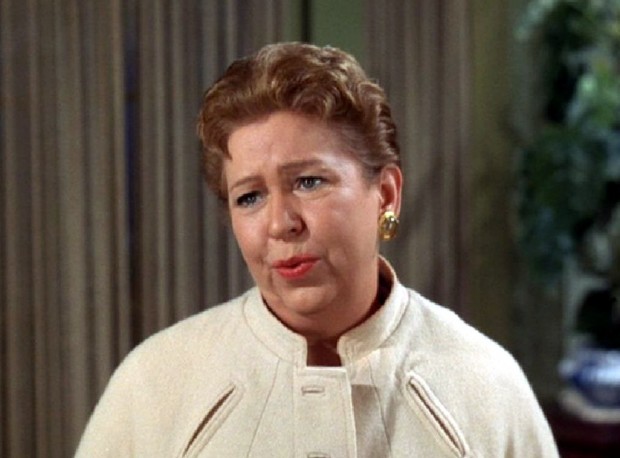 The name “Mary Lansing” isn’t going to be instantly familiar to many people, but the actress who was born on this date back in 1911 has a voice that might be recognizable to Walt Disney fans.  For the 1942 animated feature Bambi, Lansing provided the voice for the “Aunt Ena” and “Mrs. Possum” characters; the Louisiana native was just eighteen when she got her first taste of show business, with walk-on parts in such films as Happy Days (1929), Just Imagine (1930) and The Trial of Vivienne Ware (1932).

Mary’s show business career would blossom a bit more in the aural medium, however.  She began in radio back in the early 1930s; it was on a program called The Georgia Fifield Players that she met another radio actor who became her husband in 1933: Frank Nelson.  Nelson, of course, was one of the stock company players on radio and TV’s The Jack Benny Program, on which Lansing appeared on occasion (having an “in,” so to speak).  The Nelsons also worked together on a situation comedy that was heard over CBS (a three-day-a-week quarter hour for California Fruit) between 1942 and 1943 entitled Today at the Duncans, which cast them as a husband and wife experiencing many of the same troubles as most wartime families.  (Lansing and Nelson divorced in 1970; he would marry his fellow Benny co-worker Veola Vonn, to whom he stayed married until his death in 1986.)

But Mary demonstrated that she didn’t necessarily need to be “Mrs. Frank Nelson” to get a foot in radio’s door; she succeeded on her own merits, appearing on such prestigious dramatic anthologies as The Lux Radio Theatre, Hallmark Playhouse, The First Nighter Program, Family Theatre and The Mercury Summer Theater (with Orson Welles!).  She demonstrated a knack for comedy as well, emoting on such radio sitcoms as The Life of Riley, Amos ‘n’ Andy, My Little Margie, Fibber McGee & Molly, and the Shirley Temple version (in 1942) of Junior Miss, on which Lansing played her mother, Grace.  Mary was also one of those hard-working radio thespians who did whatever it took to get the groceries, including much “soap opera” work on series like One Man’s Family, The Guiding Light and The Private Practice of Dr. Dana.

A lot of the programs listed above have not survived the ravages of time and neglect, but fortunately some of Lansing’s radio performances have been preserved for future generations of listeners.  She was a member of the repertory company nicknamed “Whistler’s Children” (the appellation given to those actors and actresses who frequently appeared on The Whistler), and she can also be heard in surviving broadcasts of series like Gunsmoke, Suspense, Escape, Broadway’s My Beat and Yours Truly, Johnny Dollar.  Her experience in radio allowed her to transition with ease into TV roles; she guested on such series as The Real McCoys, Dr. Kildare, The Patty Duke Show, Bewitched and Gomer Pyle, U.S.M.C.  Lansing’s best-remembered boob tube gig was a semi-regular role as Martha Clark, wife of fix-it shop owner Emmett (played by Paul Hartman) on The Andy Griffith Show.  Mary played Martha on that series three times (and was in a dozen other episodes as different characters, including three as “Mrs. Rodenbach”) and then transitioned to the Griffith Show spin-off Mayberry R.F.D., where she reprised her role in nine additional episodes.  By 1974, Lansing had retired from the TV biz but she had plenty of other interests to occupy her time.  She moonlighted as an architectural designer (developing her own home in Studio City, known as “The Fryman Ranch”) and continued to be active in live theatre as founder and producer of The Hollywood Show Place Theatre.