Some performers take a lifetime to reach their full potential, and some pack an entire lifetime’s worth of accomplishments into a few short years. And then there’s Orson Welles — who lived a long, full life in which his greatest accomplishments were followed by a long, slow decline. His was the classic case of a prodigy who was too big for the world he was born into.

That world was Kenosha, Wisconsin, famous as the home of the Nash automobile and the Kelvinator refrigerator…and about as far from Broadway in its mindset and its values as a place could possibly be. That was the world that George Orson Welles bellowed his way into on May 6, 1915 — and a world that he got out of as soon as he possibly could. It wasn’t a bad place to grow up, all things considered, but it wasn’t big enough to contain Orson Welles. He was a bright, inquisitive boy with an instinctive love for performing — a gift brought to fruition through his experiences at a small private school outside Chicago. Before he was in his teens, the boy was writing, producing, and staging his own dramas. Before he was twenty, he was a rising star on the New York stage and making his first forays into radio.

By 1935, Orson Welles was a familiar figure in the halls of CBS — doing bits on most of the network’s New York-based dramatic features, and contributing significantly to The March of Time, where his flair for dialect work made him invaluable in the impersonation of various figures in the news of the day. Welles enjoyed radio (especially the wages he earned there), but his real love was the stage, and he devoted his most creative efforts in that direction. The Works Progress Administration’s Federal Theatre Project gave him the opportunity to produce an unprecedented African-American version of Macbeth. The notoriety he earned from that venture brought him to the attention of New York’s experimental theatre community and pushed him, over the next two years, from one artistic triumph to another.

None of these plays, however, were commercial hits — and Welles was forced to keep working in radio to earn his bed and board. He kept playing bit roles in a wide variety of series, but he also took time to explore the experimental aspects of radio drama. At the age of twenty-one, he boiled Hamlet down to fifty-nine minutes in a startling two-part broadcast for the Columbia Workshop. At a time when Shakespeare was traditionally presented on radio in a stiff, formal manner (when it was attempted at all), Welles’ production was the height of audacity. It also forever marked Welles around the networks as more than just an actor with an unforgettable voice. 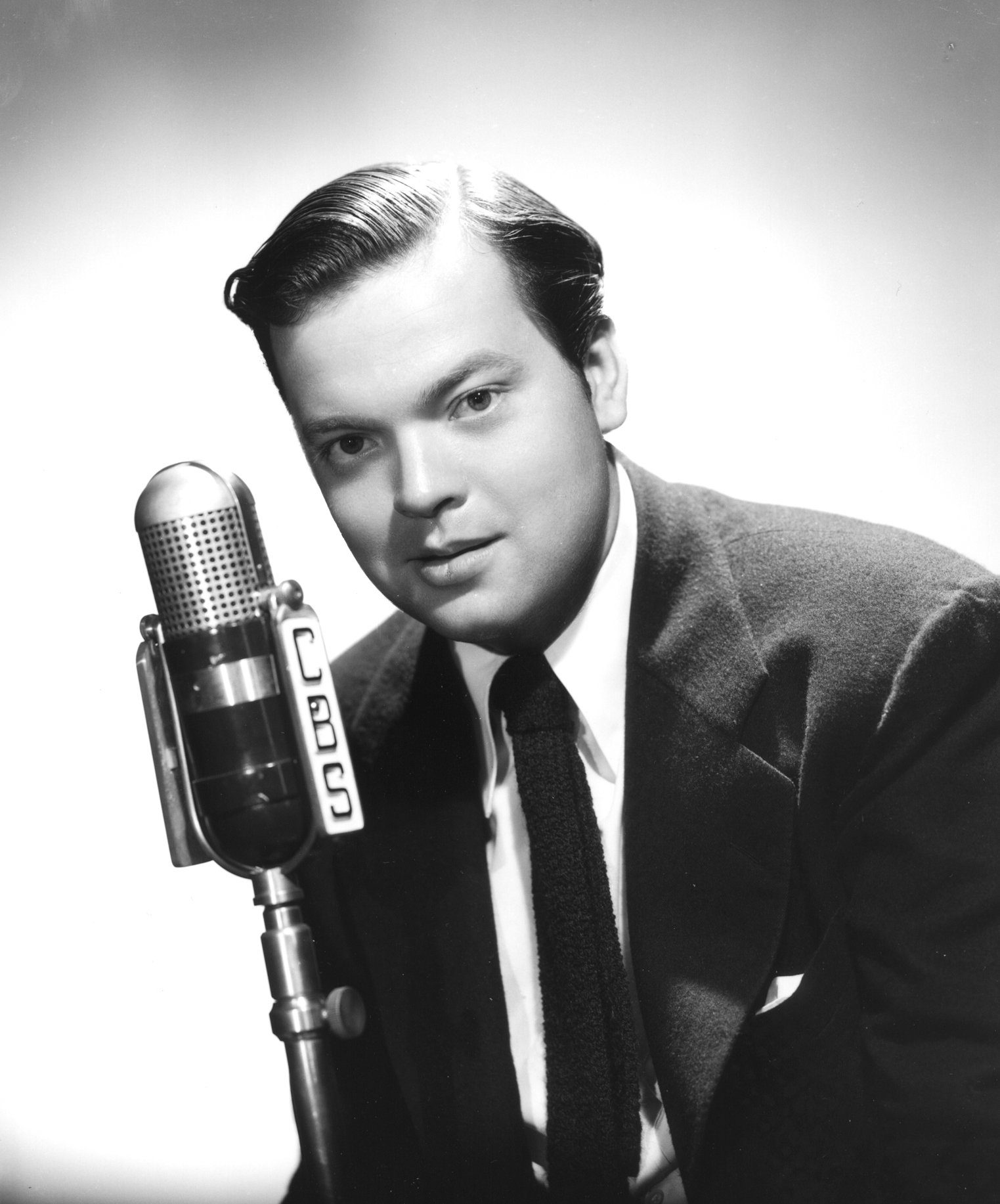 In 1937, Welles took his most dramatic step yet. He quit the Federal Theatre Project and teamed with producer John Houseman and a troupe of enthusiastic young actors to form The Mercury Theatre, a new repertory group devoted to experimental drama. Its first production would be a startling modern-dress adaptation of Julius Caesar, turned into a powerful allegory for modern times. But, before this show could open, Welles needed money — and radio proved the best way to get it. In the Summer of 1937, Welles and his troupe broke Hugo’s Les Miserables down into six half-hour chapters for presentation over the Mutual network. And, he followed up that ambitious undertaking with what would become one of his (and radio’s) most famous projects. Stepping into the slouch hat and cloak of Lamont Cranston, Welles became “The Shadow.”

Although knowing what evils lurked in the hearts of men might seem heady stuff to the Sunday suppertime listening crowd, it was something of a comedown for Welles, and he tended to treat the part lightly — skipping rehearsals, rarely bothering to read the scripts before performing them, never quite taking the whole business seriously. And perversely, it was exactly that insouciant quality that made his Cranston so appealing…and, by contrast, what made his Shadow so menacing.

Welles played The Shadow for about a year before moving on to a project more worthy of his burgeoning talents. In the Summer of 1938, The Mercury Theatre on the Air came to CBS with adaptations of great works of literature, with Houseman producing and Welles directing and performing in each program. Previous experimental theatre programs on radio had featured anonymous talent — the play itself was the thing. Orson Welles, however, would now give the experimental-radio movement a distinct personality and an unforgettable voice. His Halloween production of “The War of the Worlds” is undoubtedly the most famous program of the series — the most famous single radio drama of all time – but, taken in its totality, The Mercury Theatre on the Air marked a high point in radio’s evolution as a dramatic medium.

And just as quickly as he reached that peak, he started down the other side. On the coattails of the “War of the Worlds” brouhaha, Campbell’s Soup bought The Mercury Theatre program and turned it into The Campbell Playhouse. It remained a fine series, but it was no longer pure, unfiltered Orson Welles. It began to use famous guest stars in its cast, its scripts drifted away from experimental drama and toward the safe and the commercial. Orson Welles himself was becoming less of a producer-director-star and more of a brand — and as the 1930’s became the 1940’s, that trend would only continue.

Welles went west in 1940 to begin his movie career, which reached an immediate peak with Citizen Kane. However, whenever he needed money to finance an ongoing project, he would come back to radio. Sometimes those ventures produced extraordinary, unforgettable work. For example, his 1942 Suspense role in “The Hitch-Hiker” is one of the medium’s tour-de-force performances. But, increasingly, Welles would use his radio work as a sort of self-parody, making light of his reputation as a prodigy and creating a bizarre comic persona as a conceited, self-involved, pompous Supreme Artiste. A guest shot with Fred Allen in 1942, where he was described as making an entrance that had him “coming out of four doors at once” cemented this image. In radio’s eternal tendency to knock over its own icons, Welles the Legend was forever after Welles the Irredeemable Ham.

He would make one more attempt at doing something unusual in radio, with a short-lived variety series in 1944. Entitled Orson Welles’ Radio Almanac, and sponsored by the Socony-Vacuum Oil Company, this series offered an odd cross between the highbrow and lowbrow elements of the Welles image. There he was yukking it up with his announcer and his bandleader and his guest stars in best Jack Benny fashion…and then, suddenly, there he was offering dramatic readings from Shakespeare to Thomas Paine to the Bible. It was a disjointed, fascinating series, quite unlike anything else on the air, and it was destined for a very short life. Welles and the sponsor were at odds for the entire run of the program, and the sponsor won.

There would be a brief summer revival of The Mercury Theatre in 1946, but it seemed more of an exercise in nostalgia than anything else. Welles’ career in network radio was essentially over by the time he was thirty-one years old. The late forties proved a difficult period in his life, filled with projects that wouldn’t quite materialize, and there were attempts to recapture his radio magic in syndication. Welles would sign with English producer Harry A. Towers in 1950 to recreate his Third Man film role as con-man Harry Lime. He followed that with an interesting crime anthology, The Black Museum, and a supporting performance as Professor Moriarty in the Towers production of Sherlock Holmes. While these were all entertaining, well-produced series, there was nothing particularly experimental about them, nothing uniquely Wellesian in their concept or their execution. But Welles’ name, the Welles brand, ensured their success in the United States, and they helped the former prodigy keep body and soul together through a difficult period in his life.

Orson Welles would have subsequent triumphs, culminating in the dark masterwork Touch of Evil in 1959. But, that film would be his last truly great achievement. For the next two decades, he would be a personality, a celebrity, a producer of projects that never seemed to come to fruition, a relic of a lost era. He was a talk-show raconteur, a game-show panelist, a commercial pitchman, a narrator of documentaries and exploitation films, and, in the end, as the voice of a monstrous cartoon robot. It’s tempting to soliloquize on the ultimate tragedy of the boy wonder who was too big for Kenosha, but the surviving record of his early accomplishments will endure wherever people remember radio.